Retro to Reimagined: Who is the King of VG Consoles?

Whether you are an old-school gamer and fan of the classics or a next-generation geek who delights in experimental expansion, everyone who loves gaming has a favorite console. All video game enthusiasts respect the various consoles that changed the game, but they do not agree on which system is the best of all time.

Which brand would you crown "King of Video Game Consoles?" And why? Everyone has a favorite, and that's based on a host of reasons or factors.

With an ever-changing market and a bevy of competitors, brands such as PlayStation and Nintendo are constantly looking to release the latest and greatest generation of at-home gaming. Over the past several decades, a few consoles have shattered the ceiling and left their competitors in the dust.

Picking the best gaming system requires the consideration of five key factors: sales, market influence, technology, playability, and game availability/variety. There are plenty of consoles that hit the mark on a few of these variables, but the best machine truly would be the one that ticks the box in every category.

Check out how some of the top game systems of the "Gaming Era" score in those five categories:

1. Selling Out in Stores

Since the boom of at-home gaming began, hundreds of millions of devices have sold worldwide. Giants like Nintendo, Microsoft, and Sega fought to be the highest-selling console of all time. However, Sony’s PlayStation 2 system takes that cake with over 155 million devices sold.

After its release in 2000, it quickly became evident the successor to the original PlayStation offered all the bells and whistles of modern gaming within a sleek and easy-to-use device. The PlayStation 2 not only offered players backward compatibility, allowing players to enjoy all their favorite games on a newer console, but also released some of Sony’s most popular games like Grand Theft Auto: San Andreas and Kingdom Hearts.

The PlayStation 2 also provided gamers with the addition of a built-in DVD player. It was a dream come true to have a device that offered multiple forms of entertainment. This added feature quickly became a staple in the future of console design.

As for modern-day gaming, the rave reviews for the Nintendo Switch continue to pour in since its release in 2017. Offering the user both a manageable docking station and effortless portable gaming, the Switch’s innovative design is user-friendly and versatile. With over 100 million systems sold, the Switch boasts a cornucopia of games to play.

With popular franchises like Super Mario and Zelda making waves in the gaming community for decades, the Nintendo Switch has been a hub for the creation of some of the best-ever Nintendo games. For old-school fans, the Switch has released retro games from Nintendo 64, Game Cube and other previous devices.

If you want to try something new or revisit some old favorites, this console's range and versatility made it the top-selling device in 2022.

Some of the most influential consoles in the industry never made it to the top-selling spot — but that doesn’t make them any less important to the history of video gaming.

The Sega Dreamcast might go down as one of the most influential video game consoles of all time. But despite its impressive library of inventive and genre-expanding games and the introduction to online gameplay, the Dreamcast had a disappointingly small number of sales, being overshadowed by the far more popular Playstation 2.

Although equipped with highly innovative features such as removable memory cards and immersive role-playing games unlike anything else on the market, the efforts of this console were overlooked by customers impressed by Sony's addition of DVD players to the Playstation.

Despite being overtly overshadowed by a more popular system, many of the technologically advanced features of the Dreamcast are still used in modern systems. This makes the Dreamcast one of the most important consoles in the history of — and for the future of — video games.

The Dreamcast is a prime example of how groundbreaking technology isn’t always what sells. Even with Sega’s failure, the growth of gaming relies on old-school invention.

Gaming isn’t all about where the technology has been. To get a complete picture of this industry, you must look at the groundbreaking technology being used in the new consoles and imagine how they will evolve and change future gaming systems.

The Xbox Series X broke records after its release in 2020. It has lightning-fast loading times and an unbeatable collection of backward-compatible games in a constantly updating library. The Series X also boasts top-of-the-line mechanics in a sleek body.

This console offers 4k graphics and minimal wait time for game downloads. With a slightly faster CPU, it is arguably a more powerful console than its rival — the PS5.

Faced with the example of mega-selling games like Halo Infinite, which has sold over 81 million copies since its release in November 2021, all of the VG titans realize the future of gaming lies in the hands of the company that can produce the largest quantity of content in the lowest amount of wait time.

Gaming in an instant: That's what gamers are excited to see.

Looking to the future, gamers are excited about the release of the Playstation VR2 in February of 2023. This new leap into the world of virtual reality completely reinvents the wheel of console gaming as players expect to experience the excitement of the PS5 in a lifelike way.

With so many different game types accessible in VR, there is truly something for everyone — nontraditional and traditional gamers alike. Gamers are excited to see which of their favorite classic PlayStation games and open-world exploration games such as Skyrim make it into the catalog of games in the PS VR2.

With the oncoming invention of a whole new world in gaming possibilities, modern technology is sure to excite any classic gamer looking for something new!

4. Fun for the Family

Consoles that offer a range of games and features are often top contenders in the "quest for the crown."

The Nintendo Wii gives users a world of fun in this inventive, family-friendly device. With motion-sensor controls and a uniquely interactive gaming experience, this quirky console has sold over 101 million units since its release in 2006.

With games like bowling, tennis, and many more untraditional gaming options, people got off the couch and on their feet. This device revolutionized gaming and helped involve the whole family in the fun!

With Wii Sports still being Nintendo's best-selling title, the effects of the Wii have lived on inside newer consoles like the Xbox 360 and the Nintendo Switch.

If there was a target audience, the Wii had a game for them. Young gamers could enjoy racing their parents in Mario Kart, while metalhead teens –and former teens — learned how to rock out to musical classics on Guitar Hero.

With Nintendo making an easily accessible system that found its way into millions of family rooms worldwide, it’s no wonder that a generation of kids grew up experiencing gaming on the Wii. It's also a reason why this console is a heavyweight contender for the coveted title of “Best Console of All Time.”

Consoles are nothing without the games that are available on them. Household name franchises such as Super Mario and Call of Duty have created staple games that are known and loved across the entire globe. Old-school gamers appreciate playing games on their original systems because they can capture the wonder and awe of experiencing a new game in its prime.

Some of the top-selling games made their debut on these retro consoles, and Microsoft’s 2001 release of the Xbox unveiled a stunning collection of games that are still iconic as of the early 2020s. With games like Halo and Tom Clancy’s Splinter Cell selling well into the millions of units, it is no wonder why the release of the Xbox made such big waves in gaming.

Spartan Locke Character Review: Everything You Should Know

As new generations of Halo are being released (with Halo Infinite as the second highest-selling game after its release in 2021), it is clear to see that game franchises are impactful in the success of gaming consoles. Consumers continue to show their loyalty to favorite franchises, so it is important to show respect to the console where these games originally blossomed.

Modern-day systems in the 2020s allow players to relive their youth and their glory days by playing revamped classic games. Developers enhance the experience with new and improved audio and visuals. Higher resolutions make the old games more palatable on modern gaming screens.

Systems such as the Nintendo Switch and the Xbox Series X offer players a vast library of retro games from top-selling franchises. The benefit of playing old games on new systems is a faster runtime and the ability to play many games that are now only available on these updated systems.

Due to the advancement of technology in console gaming, contemporary gamers can experience the classic games of their youth — or their parents' or even grandparents' youth — with one device.

And The Winner Is…

Every console created has made its mark on the fabric of the gaming community. Some consoles revolutionized the industry; others humbly brought joy into the home. This article touched upon several amazing consoles that have all left an indelible mark on the world of gaming.

But which console is truly the "King?"

As noted in the opening section of the article, considering each system in its prime, the best gaming console is the one that received the overall highest marks in each of the five categories above.

Based on this research, the console that checks all the boxes is the 1990 release of the Super Nintendo Entertainment System (SNES).

The SNES revolutionized the gaming industry by marketing the device towards family-friendly gaming and outselling its nearest competitor, Sega's MegaDrive, with about 49 million units sold.

The SNES is the birthplace of so many iconic brands: Donkey Kong Country, The Legend of Zelda, and Mario Kart readily spring to mind, amongst countless others. Not only was Super Nintendo a revolutionizing force when it debuted, but it also remains extremely influential in modern-day gaming.

The upgraded version made significant improvements over its predecessor, the NES. With smoother processors and better graphics, Nintendo used the SNES to show consumers the company was a serious competitor in the video game industry.

Nintendo's commitment to advancing technology was another factor in the "election" of the King of Consoles.

The SNES was an important jumping pad for Nintendo to launch into decades of success.

Technology is a ball that continues to roll with no sign of slowing or stopping. Developers are constantly pushing to bring the breakthroughs of the past into the advancement of the future. Technology promises to give the world faster, more immersive experiences beyond the known edge of reality.

Everyone has their way of determining what makes something the "best," so you may not agree with the conclusion of this article.

Taste, of course, is subjective.

The undisputed fact is that the best video game console is the one that holds your fondest memories, highest records, and favorite games — whether that was your childhood console or the latest device you just picked up and brought home last week. The best video game consoles are the ones that have brought entertainment and fun into the comfort of your own home. They're the ones that you hope you may pass down to your kids in the future — and that they may even show their kids, too.

Gamezeen is a Zeen theme demo site. Zeen is a next generation WordPress theme. It’s powerful, beautifully designed and comes with everything you need to engage your visitors and increase conversions. 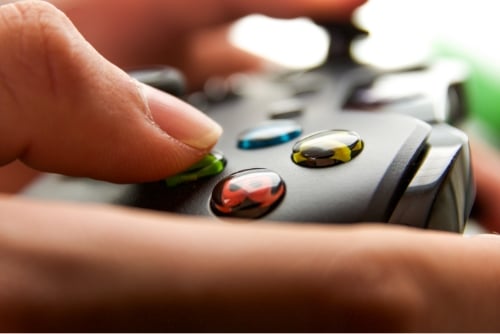 Home » Retro to Reimagined: Who is the King of VG Consoles?